My Journey to Software Development

From recruitment to software development: What happens when your boss asks you if you want to become a developer. 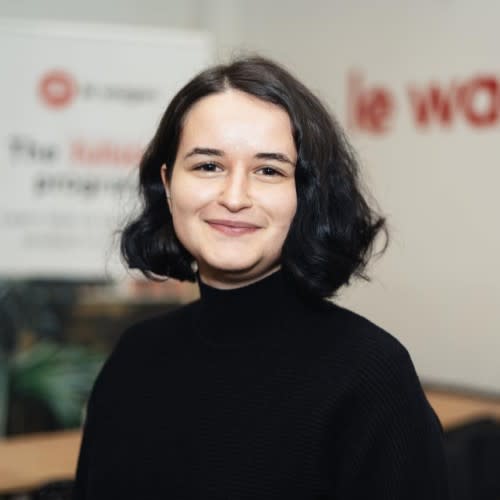 Today is my third work anniversary at Honeypot. Time flies! At just 25, I'm the third 'most ancient employee' of the company.

When I started at Honeypot, I began with an Excel sheet reporting the most common programming languages and its frameworks. Today, I just released a 6-hour online course introducing software development, a theoretical course for non-tech people.

And now, something quite unique is happening at Honeypot: A recruiter will become a developer!

In this ongoing series, I’ll be documenting my journey as a junior software developer at Honeypot. If you are interested in web development, career change, or just curious about my path, I’ll publish articles on a regular basis: share the first months, the achievements, the struggles, but most importantly the takeaways of learning, growing and working in tech.

How did I get here?

I’ve been helping developers get onto the Honeypot platform for the past three years. I have no background in IT, Computer Science or related fields. I simply arrived at the company very curious, and eager to discover this uncommon role and from day one, I started to gather information about software development. I soon learned that it's impossible to get everything at once, and the learning never seemed to stop.

Three years of formative knowledge and a nine week coding bootcamp later, and I’m now a junior developer at the same company. Doing the bootcamp was an amazing and intense experience, which gave me the programming basics I needed. If you are unsure about doing a coding bootcamp, just do it. It was the best learning path I could imagine for a complex discipline such as tech.

Although it was overwhelming, I started to document every useful piece of information to help me in my quest for knowledge - all for the sake of understanding and remembering. I quickly learned that tech roles are complex, and the industry itself is recent, and therefore is not as standardised as other domains.

So I decided to dig into specific concepts and go beyond the basic understanding of software development. However, you can't summarise the work of developers and engineers in one article. Tech roles are complex, and the industry itself is recent, therefore not as standardised as other domains. One question would lead to another: what is DevOps? Who is a DevOps Engineer? What is Continuous Integration? What is Test Driven Development? Behaviour-Driven Development? What is Cloud Computing? What are Distributed Systems? Who is a Data Scientist? Who is a Data Engineer?

Discovering one concept was like opening several drawers at the same time.

I’d teach my colleagues these concepts so that they could be more comfortable in their work, and these teachings were soon compiled in an online course for non-tech people. It started with the basics of software development, which eventually became more concrete concepts, all accompanied with further resources.

You’d think that the next step was logical. And still, it seemed I couldn’t figure it out for myself.

It wasn’t until my boss asked that very obvious question: “Would you like to become a developer?”. Why hadn’t I thought of that?

My switch to engineering was not decided overnight. From the day it was suggested and until my final decision, 6 months went by.

At that time, I was a Senior Talent Manager, the most experienced in my team. I was mentoring five colleagues, onboarding each new newcomer, and I knew the product by heart. I was literally living, eating, breathing Talent Management for three years. I was good at it, and I was convinced I would do this for a long time. We all have a colleague who always says ‘Back in the old days, we were doing it this way.’ Well, in my team, that was me. The go-to person, the bookworm of talent management.

As a result, “Would you like to become a developer?” came as unexpected, as a shock. A positive shock though. You don’t hear that from your boss every day.

Then, came the questions, the concerns. I was scared of missing future opportunities within my current team, leaving my leadership responsibilities and starting over as a junior again. The next steps for me was to become a Team Lead, officially. And, let's be realistic, I would not have survived a split between the busiest teams of the company - the Talent Success Management and the Engineering Team.

I also couldn’t ignore the barrage of doubts in my mind. What if coding is too difficult? What if I don’t like it? What if I'm just bad at it?

I remember taking a long weekend with my boyfriend, out of town, to breath and think about what I truly wanted to do with my life. We sat by a lake, and I just started to throw all the questions I had kept to myself for the past few months.

His reply was everything I needed to move on:

“But what if you just try? You will never know if you never try” - And believe me, he knows. He has been a developer for 10 years.

And that's how I started the switch.

Honeypot was ready to fully support my career change, so I decided to start in the most intense but structured way: a coding bootcamp, which was nine weeks of coding courses to learn the basics of programming, getting used to development tools and workflows, working on the frontend and backend, understanding databases and finally, creating a full application as a team. Sounds like a lot of work for just nine weeks? It was.

It was stressful and frustrating but incredibly rewarding, and when I came back to work, I went straight in as a junior developer. It’s been a few weeks now, with new colleagues, a new workflow, the same product, from a new perspective.

Many, many things happen in the first months of a newbie. It’s a rollercoaster of emotions, achievements, and struggles. But that is a story for another day.

If you are a junior developer, interested in tech, or just entering the beautiful world of the work-life, I’ll happily share my journey to software development, and give insights on the life of a junior dev - like the journal of Bridget Jones, but as a developer.